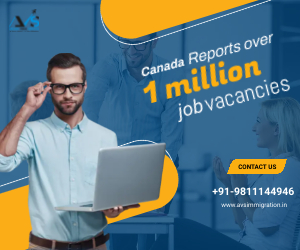 According to the 2017 Job Vacancy and Wage Survey from the Canadian Federation of Independent Business (CFIB), there are more than 1 million job vacancies in Canada. This represents a 20 percent increase since the last survey was conducted in 2014, where there were approximately 800,000 vacant jobs across the country. These numbers include both full-time and part-time positions, as well as jobs in small and large businesses.

Why this is important

The unemployment rate stayed at 7 per cent for a third month, as fewer youth searched for work.There are still more than a million job vacancies in Canada, said Diana Sarosi, an economist with TD Economics who looked at labour market data from last year to calculate how many potential employees were missing from an employer’s workforce.

The number is growing, she said. It does suggest that there is an issue out there. It also suggests employers may be struggling to find workers with skills they need or that some companies have become so unproductive they can’t fill all their positions. That could mean businesses need to look harder at hiring younger workers or those who have been out of work for a long time, she said.

It’s official. We are in a period of rampant underemployment and companies are making do with fewer employees than ever before. It’s a good time to start looking for work, if you can deal with all of these changes. If your dream is to find a full-time gig, be ready to be flexible about where and how you work.

A lot of small businesses are taking advantage of new technologies that allow them to hire freelancers for short-term projects and one-off gigs, so there’s no reason why you shouldn’t turn your ambition into an opportunity. With that in mind, here are some tips on how to start navigating through these new realities:

Step 1: What is nano-jobbing? Nano-jobbing is basically working as a freelancer, but instead of doing it on a project-by-project basis (think: writing or designing), you’re doing it long term. This means working without contracts or guaranteed pay rates. Nano jobs tend to be more focused around skills rather than specific tasks—they’re often part of larger business operations like marketing campaigns or web design. This means they can change quickly based on what customers want at any given moment, which makes them great opportunities for people who don’t have much experience under their belt yet but still want to try their hand at working independently.

Your time is valuable and you have to make a living. Don’t be afraid to think out of the box to ensure that you can work with something you love doing, but still making money out of it. One great way of thinking outside-the-box is by creating your own job! You might not make millions working for yourself, but there’s an easy way to make a lot more than what most people do as an employee: by being an entrepreneur. It is certainly true that there are no guarantees in life.

However, if you fail at entrepreneurship you will likely still have a better outcome than most employees. And if you succeed…well then, your outcome would be significantly better than most! For example, one study found that while entrepreneurs may start off earning less than they did as employees, their earnings increase dramatically after only a few years in business (typically around four years). The reason behind such a dramatic change?

As owners and operators of their businesses, entrepreneurs enjoy greater control over how much they earn each year (or even each day). So even though they may start off earning less on average than when they were employed full-time—they also get to keep all of their income instead of just a portion like before. In other words, once self-employed entrepreneurs begin earning profits from their business operations—their overall income skyrockets compared to what they made before.

How to capitalise on this trend

Jobseekers have never had more opportunities. The BMO-compiled Labour Market Indicators report shows Canada has a record number of jobs and is seeing some of its lowest unemployment rates in decades. In total, there are 1.1 million unfilled jobs, said BMO chief economist Douglas Porter.

There are very few markets where you’ve got more than one vacancy for every unemployed person, he said. It’s not like we don’t have enough people to fill these jobs — we do, but they aren’t always qualified or willing to work at those wages. It speaks to how tight things are in some industries, particularly construction and trades as well as high-skilled occupations like engineers, doctors and lawyers. But it also speaks to how soft things still are in other sectors such as retail and hospitality. To take advantage of these opportunities Canadians need to be ready with up-to-date skills that match employers’ needs. I think it’s a great time for young people entering into their careers, Mr. Porter said. The challenge will be making sure they’re trained properly.

How employers can capitalize on it

Canada’s labour market is experiencing a dramatic shift: there are roughly 910,000 unfilled jobs across Canada and employers will need to adapt to new realities. How can they do that?

Here are three key strategies you should be using right now.

1. Recognize how your employees think about their careers—and make sure it aligns with your business goals. A recent study by Deloitte found that many Canadians want to work for a company where they feel appreciated, have opportunities for growth and development, receive competitive compensation and benefits, and have an opportunity to make an impact on society or their community. Employers who know what drives their employees at work—and how those drivers align with business goals—will be better positioned to attract top talent in today’s tight labour market. The good news is that most organizations already know what drives their employees at work; it just needs some fine-tuning so it more closely aligns with company objectives.

How you can apply for these jobs

Whether you’re seeking contract work or permanent employment, it’s easy to apply for jobs online. Simply visit a company’s website, check out its available positions and submit your resume directly through their site.

If they need more information or you have questions about an application process, you can always contact them directly through email or by phone. You should also make sure that you follow companies on social media; most employers post relevant job openings on their Facebook and Twitter pages first.

Also, look at their careers page on LinkedIn to see if there are any other opportunities with their company that may not be posted anywhere else.